Listen to police and fire departments from around the world on your phone!

Listen to live audio from over 3,300 police and fire scanners, weather radios, and amateur radio repeaters from around the world (primarily in the United States and Australia though, with more being added daily).

* Add scanners you listen to the most to your Favorites list for quick access.
* View scanners that are located nearest you, sorted by distance, by clicking on “Near Me”
* View the top 50 scanners that have the most listeners (updated every 5 minutes).
* View list of scanners added most recently (new additions are being added all the time).
* Browse the directory of scanner feeds by location or by genre (public safety, weather, railroad, etc).
* Configure alerts to have the app notify you when lots of people are listening to a scanner (indicating that something big may be happening).
* Add Scanner Radio widgets and/or shortcuts to your phone’s home screen for quick access.
* Add a “Scanner Radio Favorite” shortcut to your home screen to launch a scanner feed via an alarm clock app or automation app.
* Allows you to listen to archived audio (from the past 30 days) if you have a RadioReference.com Premium Subscription. Their premium subscription is $15 for 6 months, without it you will not be able to access their audio archives using the app.

In addition to the above features, you also get the following features with this version of the app:

* The ads are removed.
* Allows you to specify what times of day you want to receive listener alerts.
* Allows you to setup listener alerts for scanners located near you.
* The play button at the top of the directory screens and on the widgets is functional.
* Acts as a Tasker Plug-in, allows you to have Tasker launch the app and have one of your Favorites automatically begin playing based on one or more conditions or have the app stop playing. One use for this feature is to have a scanner feed begin playing when your phone connects to a specific Bluetooth device and then have it stop when the connection to that Bluetooth device is no longer present.

The audio is provided by volunteers using real scanner radios. If your area is not available, see the menu in the app for information on how to get it added.

Explanation of why various permissions are needed:

The “Modify global system settings” permission is needed in order for the app to be able to change the device’s “Wi-Fi Sleep Policy” to “Never” (but only with your permission). When you run the app, it will check the setting and ask you if you would like for it to be changed to “Never” (if it’s set to something else) so that the scanner audio won’t be interrupted if the screen turns off while you’re listening over Wi-Fi.

The “Phone Calls / Read Phone State” permission is needed by the app so that it can detect when you’re placing a phone call (or when one is being received) so that it can automatically stop the streaming of the audio to prevent it from interfering with the call.

The “Automatically Start at Boot” permission is required so that a small portion of the app can be started when your phone boots if (and only if) you turn on the listener alert checking feature of the app (that feature is turned off by default).

If the audio repeats or the app stays connected for only a short time, try returning to a directory screen in the app, then select “Settings” from the menu, then “Player settings”, and then try changing the “Streaming method” setting. 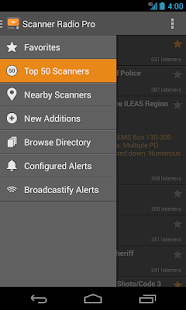 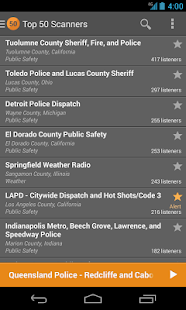